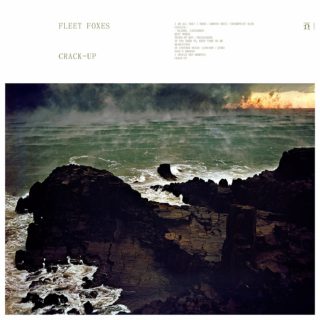 It’s been six years since we last had a new record from Fleet Foxes, during which time their frontman Robin Pecknold has picked up a university degree, and their sometime drummer Josh Tillman has emerged from his chrysalis to become Father John Misty. Returning from that extended hiatus with ‘Crack-Up’, it seems that Fleet Foxes have made a conscious decision to do things slightly differently this time around; while their first two, hugely successful records traded on melodically enchanting, straightforward songwriting, with this record their intention to move away from making another collection of conventional songs is clear.

Yet a voice with the distinctiveness and purity of Pecknold’s will lift any song; with it, he’s capable of creating those indefinable moments in music which have the power to briefly transport the listener from a mundane reality to another place altogether. Fleet Foxes’ distinctive, highly recognisable style remains on ‘Crack-Up’, but is sometimes deliberately fractured and broken up into a jarring, disjointed soundscape, as on opener ‘I Am All That I Need’. And there is enough of the unexpected, enough ‘otherness’ to really mark this record as different from their previous work.

That said, songs like ‘If You Need To, Keep Time On Me’ provide some of this album’s most absorbing moments; simple, melancholy-tinged, and giving room for Pecknold’s vocals to be front and centre of the song. Similarly the rich, warm, gently sweeping ‘Naiads, Cassadies’ and the simple, haunting ‘Kept Woman’ provide touchstones for Fleet Foxes’ underlying qualities. And the distinctive, chiming rhythm which pervades much of this band’s music is much in evidence. The warm-feeling ‘Fool’s Errand’ is somehow redolent of Christmases and firesides, and has a soaring chorus which pierces the heart.

So Fleet Foxes have certainly evolved, but have not entirely transformed, and ‘Crack-Up’ is fresh evidence of a band whose immeasurable songwriting talent shows little sign of dimming.