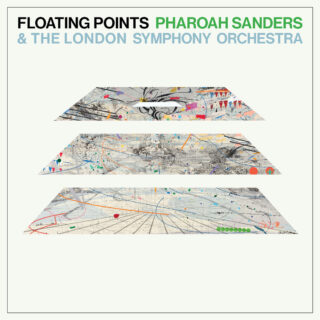 With Sam Shepherd’s Floating Points project moving further away from the dancefloor and former status as king of Plastic People with every release, it seemed like only a matter of time before he made a record with an orchestra and a free-jazz luminary. From that point of view, then, the music on Promises – a single, 45-minute semi-minimalist quasi-concerto for saxophone backed by various keyboard instruments and a string orchestra recorded in what appears to be a single, live, and rather spine-tingling take – is not a huge surprise. From the point of view of how much can be done with such sparse foundations, how to bring together fairly disparate musical worlds, and how captivating a recording can be, though, Promises is astonishing.

Nominally divided into nine sections, but rooted around a simple four-chord figure that repeats loosely and continuously throughout, the piece initially appears as a vehicle for Sanders to sigh out long, longing sax lines as delicate as their accompaniment. Soon enough, though, insistent strings arrive and Sanders almost starts to groove, finding a riff out of the circling figures beneath, pushing it around for maximum heart-wrench. From there, melancholia and yearning is superseded by ardent romanticism, a crestfallen solo violin, and a climax of almost histrionic, utterly gorgeous sadness, before burbling, bubbling electronics intertwine with Sanders’ reappearance, smoothing the emotional downslope. The piece ends with the ever-present gentle chord figure picked out on pianos, celestes and organs, and with the sense of a journey having been completed that is as transfixing, transporting and thrilling as any you’ll hear this year.

Despite its superficial simplicity and occasional flirtation with prog bombast, though, Promises is also marvellously rich: Sanders’ performance is the star turn, seeming almost three-dimensional with his breath sounds and key-clicks interacting  with Shepherd’s electronics, and the LSO’s blending of their instruments is always the moreish side of soupy. Perhaps unhelpfully for the reader of this review, though, written descriptions of all Promises’ subtleties lack the bandwidth required to do them justice. Instead, the best way to understand the record, it would seem, is to listen to it over and over, each time more closely than the last, trusting in its revelatory powers. That way, something intensely rewarding emerges: few recent records have given back as generously as this.