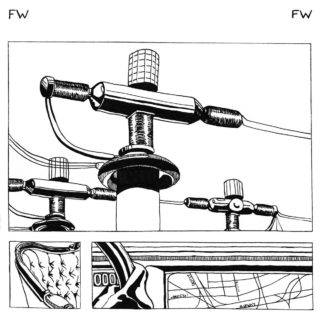 It’s been two years since the last release from sloppy, young, New Jersey band Forth Wanderers, but with their self-titled second album – their first for Sub Pop – they show time has honed their sound making assured anthems of heartfelt songs.

The process of songwriting between keystones Ben Guterl and Ava Trilling, where the former sends instrumental demos to the latter for lyrics before bringing in the rest of the band to collaborate further, continues to create strong but vulnerable songs. Trilling’s emotionally honest words, documenting and reflecting relationships both with others and herself, soar against sharp guitars, driving rhythm, and subtle but intricate melodies and harmonies to create a rock record with a lot of heart.

Opener ‘Nervermine’ sets the scene with an undulating tune as swooning vocals reflect on a past lover, while recent single ‘Not For Me’ sweeps through with uplifting pace and power vocals. Across the rest of the album there’s touches of country twang (‘Taste’), late night smokinesss (‘Be My Baby’), and percussively building indie swagger (‘Temporary’). Throughout it’s bursting with the uncontainable energy of glorious garage rock from a band confident in approach and growing into their sound.