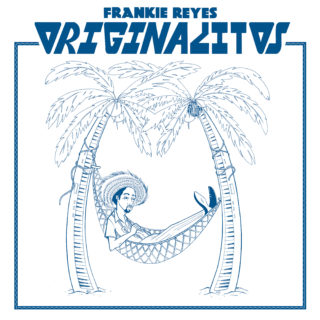 L.A.-based electronic artist and producer Gabriel Reyes-Whittaker has more aliases than any one man should, having released music over the past decade as Gifted & Blessed, The Abstract Eye, The Reflektor, Julian Abelar and one half of the duo The Steoples.

However, Originalitos, his newest album and second under the nom-de-plume Frankie Reyes, is a decidedly different kettle of fish. In his other projects, Reyes-Whittaker typically generates mind-expanding and futuristic up-tempo or ambient electronic, but the music released under Frankie Reyes is more sacred – less an expansion of sound, more a concentration of it. It’s the answer to Reye-Whittaker’s question: “How might I use the synthesiser to explore my [Puerto Rican] heritage?”

Like Boleros Valses y Mas, his first album as Frankie Reyes, the set-up is deliberately restricted with only an Oberheim synth, MIDI sequencer and an effects pedal utilised on Originalitos. The resulting sound is both mechanic and organic, oddly captivating and haunting, but cyclical, like an operational yet abandoned carousel.

Limited by the project’s narrow scope, each of the eight instrumental songs treads similar ground; the entire record carried along by Reyes-Whittaker’s hazy reimagining of bolero, a slow and romantic Latin tempo, using contemporary technology, the album reaching  its most affecting during ‘Alma De La Palma’.

While only just over 20 minutes long, the simple and unwavering pace of the songs can become repetitive and calls to mind Vivian Mercier’s infamous review of Waiting for Godot: “nothing happens, twice” (only here it’s eight times). While a unique and evocative sound, what is calming and coaxing on track one may wear thin by track eight.