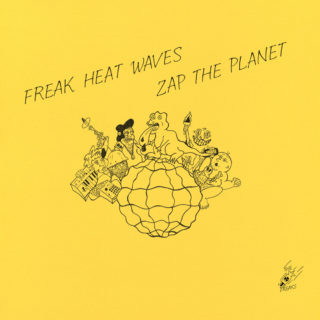 It can be hard to make an argument in favour of nostalgia in music. While some bands have, at times, utilised the magic of the past to great effect, on the whole music’s relationship with all things retro is painfully counter-productive.

With Zap The Planet, Freak Heat Waves tackle this issue head-on, in the process making a convincing case that nostalgia can be fresh and exciting. These Canadian masters of lo-fi have avoided the imitation trap by reminiscing about a past that never actually existed. A past full of drooping VHS reels, analogue drum machines and sun-melted guitars. The sort of past that makes you wish you could fire up the DeLorean and (re)visit after a particularly dreary afternoon in the office.

By ignoring the agreed history of pop, the group have in essence bought themselves space to toy with nostalgia without succumbing to it. On ‘Busted’ drawling vocals sloop around, trickling down the side of 808-inspired rhythms that feel like they’re going to fall apart as you listen. It’s a celebration of a hazy, fictionalised 1980s.

That’s not to say the record is all fun and games. While the album may, on the surface, sound perfectly satisfied, deep down, underneath it all, there is a tinge of sedated dread. The Peaking Lights-inspired ‘I’m Zapped’ in particular oozes this feeling. The drum beat rolls and rolls without ever reaching its destination, suggesting all is not well in the group’s imagined history.

Freak Heat Waves have shown that nostalgia, used wisely, can be a powerful tool. The blueprint is clear: stay away from the tributes and delve into the imaginary. It couldn’t be simpler, really.