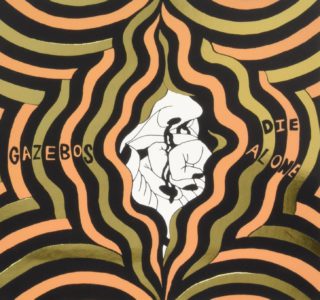 Seattle quartet Gazebos’ debut album, ‘Die Alone’ bounces along with breakneck campiness, like the live recording of a prom band in the final scenes of an 80s teen movie. The nine tracks on offer veer between surf-rock melodies, grunge riffs, post-punk squawks and the lightest hints of prog. Given time – or greater focus – this could have made for a noteworthy mixture, but the reality is a mess. It’s a sugar-glazed patchwork of ideas, which tries hard to please and consistently fails to deliver.

Of course, it’s not all bad: lead-singer Shannon Perry’s vocals are a saving grace, while album standout ‘There Are Worse Things I Could Do’, hints at something rather wonderful – although perhaps that’s because there’s less room for laborious sonic tangents when you’re doing a straight cover from the <em>Grease</em> soundtrack. ‘Die Alone’ is neither innovative, nor inventive, just a retread of stuff you’ve heard done better before, and while the band might self-describe their sound as ‘Whoa-Pop’, on the basis of this, ‘Oh,No!-Pop’ seems like a better adjective.