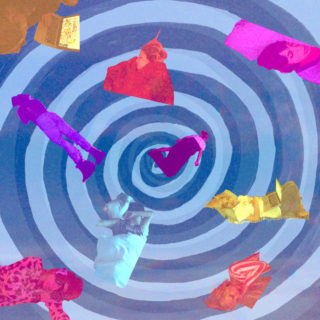 Genevieve Artadi recorded her second album in a time of personal disorder, and the result, Dizzy Strange Summer, attempts to mirror this sense of upheaval. To achieve this, it bounces wildly between genres and collaborators, to the point where it often feels like no two tracks were recorded with the exact same lineup of people.

And with 16 tracks squeezed into 47 minutes, there are definitely plenty of ideas to go around. Occasionally this lends the listening experience the looser, more playful feel of a mixtape rather than a traditional album, letting you stumble across tracks which flare brilliantly for a moment before disappearing just as fast and leave you wanting more. ‘Loneliness Grows’ is one such track, with glistening Tangerine Dream synths and trap-inflected drum programming making the song feel like one of Oneohtrix Point Never’s scores for the Safdie brothers. It’s a credit to Artadi that her vocals don’t feel out of place – a lesser vocalist would be completely overwhelmed.

However, the album’s best tracks tend to cluster in the second half, by which point a decent number of listeners may have been put off. The album gets off to a weak start with the gimmicky “I Hate When I Can’t Feel My Heart”, which is built from samples of Artadi’s voice and which gets annoying well within the song’s two-and-a-half-minute runtime. Equally, the electropop tune “Edge of the Cliff” with jazz saxophonist David Binney and Artadi’s KNOWER bandmate Louis Cole wears its two-line hook thin quickly.

Dizzy Strange Summer is at its best when it slows down, as on the standout tracks ‘Is What You Believe’ and ‘Hot Mess’. These songs give Artadi’s voice room to breathe, reflecting her history with jazz. It’s hard not to admire Genevieve Artadi’s openness to experimentation and desire to push herself, but at the same time it’s hard not to wish that she’d focus on exploring a few ideas to their full potential.