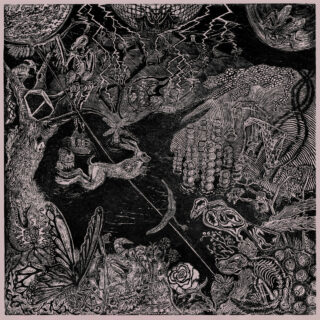 If I had a penny every time someone said, “You haven’t heard anything like this,” over the 18 years or so I’ve been allowed to desecrate the pages of this magazine, I’d certainly be poor, but probably much more excitable if that statement rang true on a more regular basis. Every so often, though, that lofty claim hits home, for better or worse.

Self-described as a “post-clown” musical outfit, Gentle Stranger’s sound (and world) is a completely illogical one. To say it makes Upon Return a polarising listen is a hefty understatement because this is an album that can only come from a place of wild, unhinged imagination.

‘Life Without Natural Snow’ is the sound of Basil Fawlty replacing Zach Condon to front Beirut; ‘Order Up’ goes all-in on the bad theatrics early, barking and gargling over the sound of a noise-rock improv band; ‘Dunce Disco’ hits with nightclub bass (blasted out of a modified Corsa driving past McDonald’s) in a Metronomy-esque pastiche of a Saturday night out that’ll perversely speak to anyone who grew up in a small town.

At this point, if you’re still searching for a coherent structure, you’d have more success creating a catwalk look from a school Lost Property box, but you can wholeheartedly believe Gentle Stranger when they say that their sound is like “throwing a bouncy ball into a hall of mirrors”. That description continues to bear out on ‘Since the Hares’ with its folky guitar, wheezing accordion and lyrical focus on dead animals, and on the similarly traditional ‘Since the Plough/Kinclaven Brig/Morpeth Rant’ with peppy flute and festival drums creating a feeling of a more wholesome, olde time England. But then ‘In the Name of Love’ lurches into dirgey guitar grunge, ‘Imagine Roses’ becomes an exercise in dark, Alfred Hitchcock-esque sound design, and the album’s longest track ‘Do You Wanna Go?’ flits from flamenco-tinged acoustic to wailing, mania-driven anguish.

Ranging from twelve seconds to almost seven minutes, these 20 tracks are as much snippets and scribbled notes of sound and poetry as they are bonafide songs, each one a puzzle piece lifted from a different jigsaw then glued together to create a magpie Picasso of everything, everywhere, all at once. By the time Upon Return reaches its bewildering end, you’re inevitably left with way more questions than when you started.