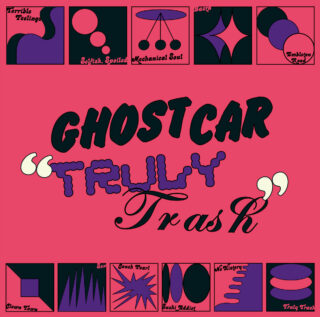 If you like succinct slices of ’60s inspired garage-rock psychedelia then keep reading. If you like bands that emit those resonances whilst also rallying against patriarchal inequality, political injustice and multifaceted oppressions then you’re especially in luck. On their debut album Truly Trash, Ghost Car display a deftness in constructing snappy, rage-filled audio fragments that are as poignant as they are magnetic.

Tracks like ‘Selfish, Spoiled’ pair the desert rock couture of synthesised organ drones and driving beats with riot grrl vocal deliveries that amount to a mashup of The Black Angels and The Slits. Elsewhere, three-minute marvel ‘Sex’ displays a penchant for a new-wave stomp with jaunty keyboard stabs and off-kilter basslines, evoking Blondie and The B-52’s.

These tracks may be musically sprightly, but lyrically the album persists in its political vehemence. Ghost Car’s words draw heavily from their personal experiences, from the individual instances of misogyny and biphobia detailed in ‘Basta’ to the more bludgeoning and palpable condemnations of the state of permacrisis that pervades contemporary British politics in ‘Truly Trash’ and ‘Clown Town’.

Truly Trash stands out as a vital listen, both sonically and thematically. With conviction and charisma, Ghost Car deliver a record of serious moral heft; their ability to do this all on their debut is truly admirable.