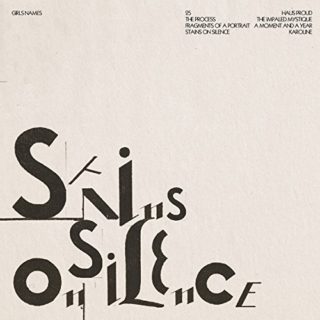 Sometimes life gets in the way. Or does it? Girls Names found themselves in an impasse that almost lead to them never releasing a new album, with a drummer gone, an unsatisfying mix of their new tracks and a stress level impossible to manage. They gave up and got back to their full-time jobs, setting music aside to find solace in a more regular life.

Regaining the peace of mind they were missing while working on the first version of ‘Stains On Silence’ eventually led to the Belfast band revisiting the eight songs found here. They started experimenting with techniques they never used before, playing with cut-ups and self-editing, and finally giving the record the shape they were looking for – a dark and gloomy one, so it’s not as if Girls Names have completely changed tack.

Aiming to cut an album fitting the post-punk norm of 30 minutes, the 38 that make up ‘Stains On Silence’ are a disquieting trip into new-wave inspired sounds. Bauhaus are the first influence to come to mind, but Girls Names sound is mellower and more sophisticated, without losing that signature dark shadow. Singer Cathal Cully’s voice (a deep baritone) is the perfect epitome of the genre’s requirements, as are the piercing synths, the vintage drum machines and the occasional metallic/industrial sounds that act as a constant wink to the ’80s and eventually threaten to overshadow the band’s own progression.