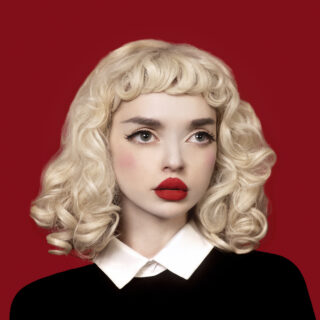 Just when you started to think the whole coldwave-meets-disco thing was getting boring, trust LA to deliver something that is truly off the wall.

Glüme’s backstory is as theatrical as it is mysterious. Describing herself as a ‘Walmart Marilyn Monroe’, her bio simply states that she’s a child star turned singer whose struggles with a heart condition called Prinzmetal angina has given her an outsider’s view on the world. Looking like a ’30s screen icon, yet displaying a curiously doll-like demeanour, she’s one of those artists who has jumped into the uncanny valley with both feet.

Her debut album similarly riffs on a Blade Runner-esque sense of retro-futurism. Produced by Italians Do It Better head honcho Johnny Jewel, The Internet is a strange blend of Hollywood glamour and dark Italio-disco that flies by like a neon-tinted fever dream. Highlights along the way include ‘Arthur Miller’ (an old-school ’40s club number delivered with Björk-like precision) and sultry banger ‘Don’t @ Me’.

My one criticism is that over its 35-minute run time, The Internet tends to sound a little too much like other IDIB artists, like Glass Candy and Chromatics, but that might be because it tries to cover so much sonic real estate. Still, if you like your dance served cold and your pop to be more human than human, then definitely consider checking this one out.