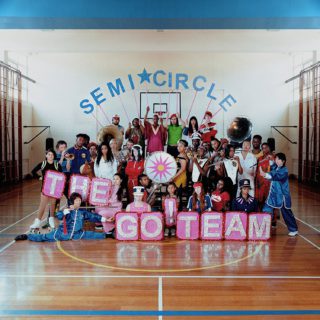 When the Go! Team tumbled into 2003 with comedy sweatbands, clattering maximalism and a giddy enthusiasm usually reserved for TV fitness instructors, there’d have been long odds on their Tiswas-does-DJ Shadow cut’n’schtick approach lasting the summer, let alone for fifteen years and five albums. Yet here they are, bounding into 2018 with a record full of pogoing sitar samples, kids spelling out song titles, school choir singalongs, shambling marching bands, tinkly glockenspiels and, at one point, a breakdown where a series of guest singers introduce themselves with their star sign: you don’t have to be crazy to be in the Go! Team, but, you sense, it helps.

Yet despite the wacky tone that envelops ‘Semicircle’, a really rather persuasive collection of songs lurks beneath. ‘Chain Link Fence’, with its steelpans and dusty string samples, is insistently and rather charmingly catchy, while the bratty girl-group sensibility of ‘The Answer’s No’ matches its surrounding musical detritus. ‘She Got Guns’, too, while not breaking any particularly new hip-hop ground, has a fairly irresistible swing, and when the band streamline their ideas, on ‘If There’s One Thing’, they reveal themselves to be quietly expert songsmiths.

Ultimately, though, ‘Semicircle’ is an acquired taste: for all the hints at pop genius, an indiscipline permeates the record, manifesting itself as grating zaniness. “Warning,” the cover should say, “contains nuts”.