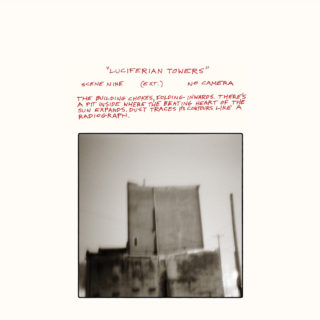 One could be forgiven for fearing a sort of inevitability about a new Godspeed You! Black Emperor album. Despite (or maybe because of) the two LPs they’ve put out since reforming in 2010, both of them reliably magnificent albeit in a procedural kind of way, there’s a sense after 20 years and seven releases that a full card on Godspeed Adjective Bingo (“apocalyptic” – check; “doomy” – check…) seems satisfyingly certain once again.

Couple that dependable spirit with the unique socio-geopolitical omnishambles of 2017 and the soil seems fertile for peak Godspeed: time for the fire that largely only smouldered through both ‘Asunder, Sweet And Other Distress’ and ‘Allelujah! Don’t Bend! Ascend!’ to break out into full-blown inferno.

In that context, then, how refreshing to encounter ‘Luciferian Towers’, an album that, while not exactly wrong-footing anyone – after all, no other current band sounds like this – is certainly not Godspeed-by-numbers either: the four pieces here are entirely shorn of the band’s trademark ethereal anxiety and free from the baleful field recordings that used to shape past Godspeed’s records so pungently. The sprawl of droning recording session detritus that previously surrounded the band’s themes, too, is clipped back to levels of almost military discipline.

What remains after that pruning is a compact, concise and tidy suite of almost consistently anthemic disaster movie soundtrack music made up of deliberative melodies and elegantly simple chord progressions. Indeed, while it would be disingenuous to describe anything here as “pop” – one can’t imagine Efrim Menuck or Mike Moya’s howling guitars getting anywhere near ‘Reputation’, say, even if the opening bars of ‘Fam/Famine’ do appear to quote Coldplay’s ‘Viva La Vida’ – this is, nonetheless, by far the most direct Godspeed album to date.

It is also the group’s most hopeful record, which becomes the defining characteristic right from the off. The album opens with a shimmering major chord like an aural sunrise, and although that title track, acting as a sort of overture here, gradually modulates into something more brooding, Sophie Trudeau’s almost bucolic violin figure endures, until the entire band are playing it in enthusiastic unison to drown out the squall beneath. ‘Bosses Hang’ has a similar rabble-rousing personality: after a deceptively simple opening chord progression that imagines all-inclusive stadium rock played in slow-mo, a set of ever-building loops leers into view that, during a recapitulation three minutes later, are then capped by the band at their most buoyant ever. At the movement’s conclusion, as triumphant crash cymbals kick up clouds of dust on each downbeat, it’s hard to recall anything that Godspeed have done that is this heroically jovial.

Even ‘Anthem For No State’, the album’s concluding piece that returns to the yearning Morricone counterpoint of the ‘F♯ A♯ ∞’ and ‘Antennas To Heaven’ era, still manages to mine some optimism from the hurtling malevolence it has created: as the record enters its final minutes, Trudeau’s violin reappears, soaring upwards as positively as ever, poignant and encouraging around the martial percussion. One final unison chord rains down, and the album comes to an abrupt halt.

Given 2017’s calamitous global tableau – impending nuclear war, tragic natural disaster, bubbling neo-nazism – a record like ‘Luciferian Towers’ would have had every right to be dissident and ugly, despondent and bleak. That it’s not, then, is what makes it slyly revelatory of Godspeed’s true spirit: instead of forlorn dejection, there’s a sense that this is the sound of Godspeed fighting against the fear with a call to arms, the album’s lean, wiry muscularity a hymn to the virtues of getting organised, acquiring a sense of order and developing a hierarchy to counter the chaos of now.

In that light, then, ‘Luciferian Towers’ sounds like a band banishing their brittle side with a display of populist strength, relegating the wistful washes to the sidelines in a time of crisis. In contrast to much of Godspeed’s back catalogue, which consists of the sort of music that soundtracks dreadful destruction and war from afar, their latest album is the sort to directly accompany a righteous, fearless march into battle. Let the wailing and the gnashing of teeth come to an end, they seem to be saying, and the action begin.