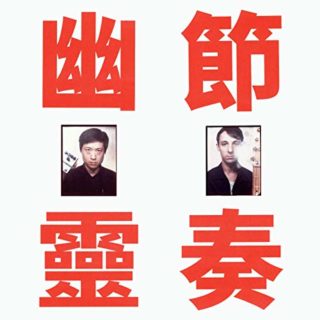 It could just be the group members’ immense decade-long pedigree in local underground scenes, but it’s still difficult to believe there are so few elements to Canadian/Chinese, Beijing-based duo Gong Gong Gong’s terse chemistry. Like the muted hypnotism of Konono No1 or the white hot intensity of Arto Lindsay’s solo shows, the best of their full-length debut, Phantom Rhythm, is testimony to fearsome psych rock by the slightest means, where little more than Joshua Frank’s bass and Tom Ng’s guitar and commanding vocal can invoke such a clatter as to outdo groups three times their size.

The percussive elements of each song comes courtesy of nothing more than struck strings (a phantom rhythm, if you will), bringing to mind any number of krautrock masterminds – Ng’s libidinal yelps, little more than grunts on ‘Wei Wei Wei’, even sound just shy of Faust’s Jean-Hervé Péron at his most incantatory. But unlike the fringe practitioners of improvised noise music, there’s an undeniable groove throughout the likes of ‘Some Kind of Demon’ and ‘Moonshadows’ that makes Phantom Rhythm a crusted blues rock party album from start to finish. For a Cantonese-speaking and understanding audience, one wonders how this might differ slightly, as Ng’s declarative vocal style sounds like that of a storyteller, especially on ‘Inner Reaches II’.

But there’s an overriding confidence that rings true, and a rare kind of intimacy you don’t often find with driving, ramshackle funk. There’s an impression that Gong Gong Gong could fall apart any moment, sending the groove to shit. But as with this sort of thing, a shambles would be fine too.