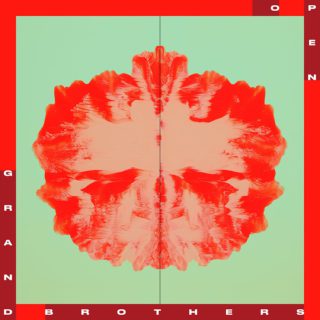 For the last few years, the likes of Peter Broderick and Olafur Arnolds et al have been at the forefront of a slowly building but now boldly present genre. Call it neo-classical if you’re sniffy, or indie classical if you’re not.

Düsseldorf duo Grandbrothers would doubtless like to avoid that label, and it’s true that their music has its own idiosyncrasies. Foremost amongst these is that despite the rich complexity of the sound they assemble, it’s all made from a single instrument – the piano – and a host of effects from homemade kit that manipulate that single sound.

‘Open’, Erol Sarp’s and Lukas Vogel’s second album, uses their tested approach to superb effect. The record opens with a nervous introduction, full of taut energy and gathering power, and the suspenseful tension of an imminent storm. Single ‘Bloodflow’, meanwhile, is stunningly on edge, coming at you in waves, beautifully and powerfully nuanced. There’s a dichotomy between calmness and a relentless, ecstatic energy; it’s six minutes of purely visceral drama.

This is typical of ‘Open’, an album that sweeps from one movement to the next in much the same way that traditional classical music does. It’s poised, often very balanced, but also wilfully falls into controlled chaos, beautiful pathos or sublime melody. Sit down with this record, embrace and absorb it; at its finest, it will really transport you.