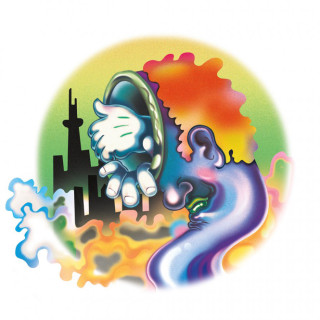 Cards on the table, if you’re a fan of Boston party band Guerilla Toss and what they do, you’re probably going to dive right into this fizzing, unhinged pool of energy and chutzpah and never want to come out. But approach it as a neutral, and it’s far harder to love. Or even figure out what’s going on half the time. There are moments where they seem to have thrown every idea possible at a song, then added a few more for good measure; stabs of synths, funky slap bass, and shrieking shards of guitar all jostle for space.

Because the group has been compared to Echoes-era The Rapture before now (somewhat optimistically), ‘Eraser Stargazer’ is out on DFA, and just occasionally they dial back the madness and let some melody and groove float out. Parts of the crazily epic ‘Grass Shack’ and the opening few bars of the title track even suggest this band really could command a dancefloor if they wished. As it is, they seem wedded to chaos, and the idea that more is definitely more. After spending some time in their company, I’m really not sure it is.