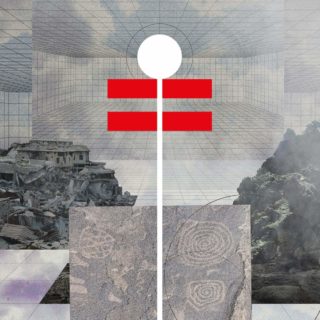 If you have any doubt that we are, in fact, navigating dire times, sift through any number of new album press releases and heed how the sheer doom of modern life is proving one almighty bastard of a muse for artists everywhere. While London duo Gum Takes Tooth (Jussi Brightmore and Tom Fug) aren’t some exception to this rule, they are one of the few instances that we should be paying attention to. But on album number three the pair don’t want your sympathy. They don’t even seek your acquiescence. They want you to submit, drop out, cut a shape or two, surrender to the void and emerge feeling less maligned by the Zeitgeist.

From the undulating synth swamp of ‘The Arrow’ and ‘Borrowed Lies’ to ‘No Walls, No Air’ – a seven-minute highlight presenting London as an “entropic ouroboros” (or a city eating itself) – this is deft, carefully-crafted anxiety, repurposed as defiant, clinically fucked-off bombast. It would be base to call the album (whose onerous noise nods to Lightning Bolt, Coil, Warp Records, The Knife and beyond) cathartic. It would be just as pointless to call it vital. This feels like a release that doesn’t seek that or any kind of endorsement, and how that informs its impact. The extent to which we may or may not emerge from these dire times is uncertain, but ten years on from forming, Brightmore and Fug have produced easily their most emphatic statement to date.