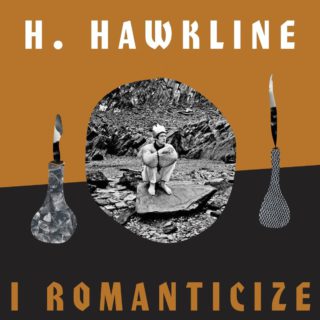 As part of the same hyper-collaborative Welsh psych scene as Cate Le Bon and Sweet Baboo, H Hawkline (aka Huw Evans) always cut a more suave figure. His songs are a little cuddlier and more approachable than his fellow travellers but, a consummate tunesmith like Harry Nilsson, there’s always salt around the rim.

‘I Romanticize’ carries on in this vein; tracks like ‘Television’ and ‘Salt Cleans’ are smooth as they come (the album was recorded in LA after all) but the tricksy chord changes and unexpected lyrical twists could have only come from a mind like Evans’. And of all the sources of inspiration to be found in 2017, ‘It Means Much’, the mellow slide-guitar-laced groover that opens the record, might be one of the most necessary, and unexpected. ‘I get all my kicks from sympathy,’ runs its chorus. ‘I’m running to police my apathy.’

As calls-to-arms go, it’s pretty chill. It’s hard to tell if ‘I Romanticize’ is comfortingly unsettling, or just unsettlingly comforting; you’ll definitely want to listen to it again to make sure.