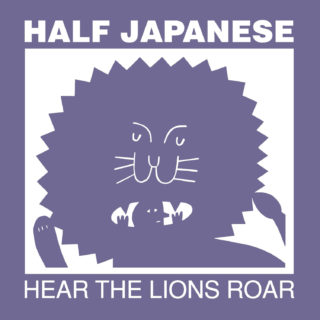 After fourteen years of relative silence, Half Japanese are back to their usual prolific selves. At their highest heights, the oddball punk band were pumping out short, sharp blasts of shambolic rock music at an unstoppable rate, searing ear drums and influencing countless other artists in the process. ‘Overjoyed’, their 2014 return, signalled a new cleaner phase; the noise may have dissipated, but the deadpan fury of the group was no less present. Instead, the band’s ragged, ranty songs have been heightened with greater instrumental prowess and a fuller approach to sound design.

With ‘Hear the Lions Roar’, they throw in horns, jagged pianos, clattering percussion and whatever else they can wallop within their musical toy box. The upbeat offerings, such as the opener ‘Wherever We Are Led’, feel like that moment when a music teacher would leave the percussion cupboard open as they leave the room, and the class would descend into a chaotic drum circle. Elsewhere, ‘Attack of the Giant Leeches’ showcases smart drum and guitar work, the band surrounding each other with slick riffs and thunderous breakdowns. For a group originally typified by their loose, amateurish style, the added detail has breathed new life into their music.

Everything is tied together by Jad Fair’s pissed-off vocal, a nasally swagger that hasn’t lost its style as it’s become more weathered. After a decade and a half of the same mood, though, some of the bite to his words has become lost.