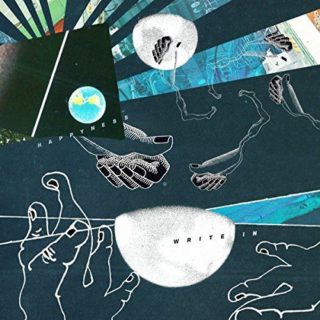 If you’ve been enjoying the recent crop of young UK bands reinvigorating the fuzzy slacker-rock sound that was pioneered by the likes of Pavement and Yo La Tengo, then Happyness is a name you will want to make yourself familiar with.

Recorded in their own makeshift studio above an abandoned book shop (that was demolished soon after), their DIY approach lends these 10 new tracks a coat of purposefully-imperfect, grungey goodness that’s cut from the same cloth as their peers in Luxury Death and Menace Beach. Feedback embalms the delightfully noisy ‘Anytime’ and ‘Bigger Glass Less Full’, which sound as if they were written after listening to ‘Loveless’ on repeat. While other highlights such as the spacey ‘Through Windows’ and ‘Reel Starts Again’ sound as if they delved a couple of decades further back than the ‘90s for inspiration, with hints of The Velvet Underground and Roxy Music seeping into their aesthetic.

‘Write In’ isn’t a pitch-perfect, squeaky-clean record, but nor was it intended to be. Instead, Happyness seem more concerned with creating a textured, unique and expressive sound, with their most exciting quality being that they’ve little concern for operating inside of any stylistic boundaries. There’s certainly room to grow, but Jon, Benji and Ash have proven themselves to be some of the finer songwriters in what’s a crowded scene, and if this album is anything to go by, in the future we’ll witness them explore even more weird and wonderful places.