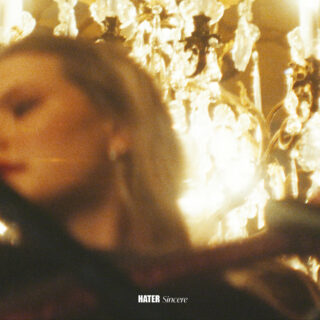 Having the words ‘hater’ and ‘sincere’ side by side could be an oxymoron – or they could be synonyms. They’re also two words that have lost their true meanings in the midst of the online sphere of misinterpreted and misused terms. Hater do capture a certain sincerity on their third release, but they seem reluctant to show their true colours.

Made up of lead singer Caroline Landahl, Måns Leaonartsson, Frederick Rundquist and Rasmus Anderson, the Swedish quartet sprinkle elements of noise rock into their restrained indie sound. ‘Summer Turns to Heartburn’ meanders as two guitars criss-cross musically, their players working their way up and down the fretboard. There are flowing elements of shoegaze that make the emotive side of the record smooth to listen to – ‘Bad Luck’, for example, would fit right in on a Clairo or even a DIIV album, Hater’s comparative lack of West Coast cool notwithstanding.

What replaces that golden beach vibe is darkness. Stripped back to bass, guitar and drums, Sincere is a carefully-paced album led by Landahl’s vocals. Her Scandinavian lilt brings to mind ABBA legend Agnetha Fältskog, but what’s more prominent on Sincere is its ’90s influence. Yet the expansiveness that was created by the classic bands of the shoegaze era is absent, with Hater erring on the side of caution. The height of the band’s energy comes with the chorus on ‘Renew, Reject’ which enlivens that track, but it fails to garner any true momentum more broadly.