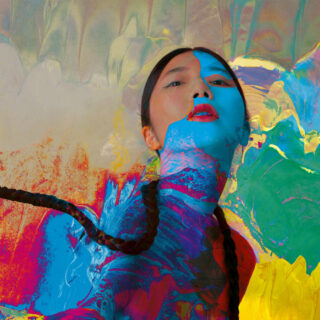 Japanese avant-garde artist Hatis Noit has named this record Aura in tribute to the German philosopher Walter Benjamin, whose influential essay The Work of Art in the Age of Mechanical Reproduction discusses the idea of original artwork, and the sensation felt in its presence (or, its aura) compared with that of a reproduction. In this case, the reproduction is recorded music, as opposed to live performance, a medium which Noit has historically favoured.

Of course, the past few years led her to confront that preference, exploring the ways in which a recording could communicate her incredible vocal artistry when live performance is no longer a possibility. The result, created with the help of producer Robert Raths (founder of Erased Tapes) and engineer extraordinaire Marta Salogni (Björk/Black Midi/Anna Meredith), is a breathtaking work which showcases the dexterity of Noit’s voice, and of the human voice in general.

No instruments feature in this recording – in fact the only sound other than Noit’s vocals is a field recording of the ocean near Fukushima. Not that you’d realise though; the level of vocal acrobatics she can conjure add as much depth as any orchestra. She can do operatic (‘Angelus Novus’), yodelling (‘Thor’) Ibeyi-esque chanting (‘A Caso’) or guttural growl (‘Aura’), each with equal mastery and sheer control over her instrument, and layered continually to build a rich tapestry of voice.

Aura is truly global in spirit – inspired by Japanese classical music, Gregorian chants, Bulgarian choirs, and folk music from around the world, and made in Berlin, London and Japan. The noises Noit makes aren’t quite words, but something more primal and instinctive – an incredible reminder of how much we can communicate with sheer, human, universal sound.