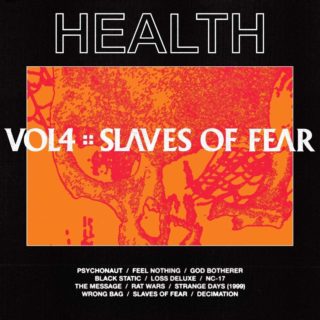 Back in 2015, L.A. noise rock conspirators HEALTH released their third album, ‘Death Magic’. It was, for the most part, a cohesive and intoxicating release, doubling up as a plunge into the fear of civilisation entering a new era of free fall. It was also the sound of a band doing something completely different – out was the experimental noisecore they honed in DIY venue The Smell, which stayed true to the band’s rule of throwing out anything that resembled previous artists; in were easily digestible electronics and vocals that sounded like The Pet Shop Boys. Boldly angled as a “document of just how frightening it feels to be alive right now”, ‘Death Magic’’s follow-up overstretches right from the outset.

Despite a conveyor belt of deft, disorientating production (not least on sample trigger-heavy opener ‘Psychonaut’, strutting mid-album peak ‘Loss Deluxe’ and the masterfully stifling ‘Wrong Bag’) ‘Vol. 4’ feels a little bulky and, sadly, a lot bromidic. At twelve tracks, one-third of the album veers off into textbook nondescript territory (something you never thought them capable of in their early atonal days); no amount of repeated listens can help to undo this. And for all his moments of pithy incision elsewhere, vocalist Jacob Duzsik’s refrains often sidestep plain wisdom in favour of falling through a trapdoor of tedious end is nigh cliché that could only conceivably resonate with, say, energy drink-guzzling diehards who buy their headphones from Game.


Despite arguably succeeding in creating their “heaviest, darkest and most aggressive” music to date (good luck not wanting to inexplicably smash something up mid-way through the likes of ‘Strange Days (1999)’, HEALTH have come up a little short. Of course, ‘Vol 4.’ is not without its own brand of death magic, but with such a potent past to their name, the band have failed to sustain what once set them apart.