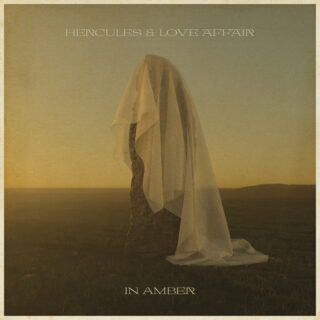 Five albums in, and Andy Butler’s knack for picking and pairing the right vocalists remains a huge part of Hercules & Love Affair’s long-term appeal. On 2017’s Omnion he found unlikely, ingenious ways to pull John Grant, Sharon Van Etten and The Horrors’ Faris Badwan into his world. On In Amber, ANOHNI returns (after appearing on Hercules & Love Affair’s self-titled debut back in 2008) to become the album’s vocal lightning rod. Here, her voice is the dominant presence – a raw, intense foil for the dark grandeur of Butler’s production.

Butler himself might not have the strongest voice (a point perhaps exacerbated by the strength of the vocalists he collaborates with) but on ‘Grace’, he finds a depth that isn’t a million miles from the understated beauty of The National. It’s a sombre opening and one that sets the tone for the solemn, meditative energy that pulls In Amber forward.

‘Who Will Save Us Now’ is stark and minimal, ‘You’ve Won This War’ is all monastic gloom and marching battle drums, and ‘Killing His Family’ lets ANOHNI’s quivering vocal shine and hang over industrial broken beat and lone sax. It’s an intense set of tracks, but another evolution of Hercules & Love Affair’s sound that turns up a few genuine highlights.