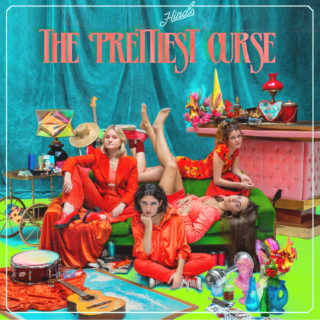 Hinds’ third album is not only the band’s most candid and unapologetic to date, but its revolutionary spirit speaks to their departure from the lo-fi, fluffy indie-pop of their 2016 debut, Leave Me Alone. While admittedly there is still a good amount of fluff here (the album is littered with upbeat tracks that could elicit the desire to dance in more or less anyone) The Prettiest Curse is an evolution. It is striking, complex, uncompromising indie-pop. More than that, it makes a bold statement: it canonizes Spanish indie-rock, bringing the Spanish language, in which the band embrace singing for the first time, into the Anglophone mainstream of the genre. The Prettiest Curse is a celebration of women – of Spanish women (the album artwork was designed by legendary photographer Ouka Leele) –  and is, at its heart, about the intricacies of women’s emotional experiences.

Hinds’ music will always be charming in its juvenility. It is, to an extent, an indie expression of a teenager in turmoil. Yet on The Prettiest Curse, the band have honed their craft: here their characteristic puerility slashes like a knife, and is wielded as a weapon in the pursuit of inclusive, jubilant, defiant indie-pop.