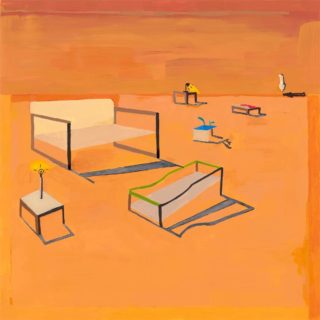 Homeshake’s fourth album doesn’t get off to a strong start. I’ll be honest: I have a problem with instrumental album openers. There’s no need to open your record with a minute and a half of musical noodling. Stick it somewhere in the middle, by all means, but don’t go there right out of the gate. It’s an age old vendetta, so it says a lot that ‘Helium’ easily makes up for this foible.

After the slow open of ‘Early’, ‘Helium’ settles into a dreamlike groove. Montreal musician Peter Sagar read a lot of Murakami between his 2017 record, ‘Fresh Air’, and this one, and it shows. The instrumentation here is surreal and otherworldly, blending synths and sound effects with Sagar’s far-out vocals. And the more effective, lyricless interludes throughout the record heighten the effect, from the blissed-out waterfall sounds of ‘Trudi and Lou’ to the spacey, bizarre ‘Salu Says Hi’. The latter sounds like a pair of alien robots having a conversation, all musical chirps and distorted voices.

On the lyrical front, the album is rooted in the everyday.  ‘Nothing Could Be Better’ is a sweet ode to total romantic contentment, with the narrator not even wanting to blink lest he miss a moment he could be looking into his lover’s eyes. Then there’s lead single ‘Like Mariah’, in which Sagar daydreams about the way life could be if only he could sing like… Mariah Carey, obviously. Who hasn’t entertained that particular fantasy on occasion? With his new record, though, it’s fair to say that Homeshake doesn’t need to master those vocal acrobatics. ‘Helium’ floats without them.