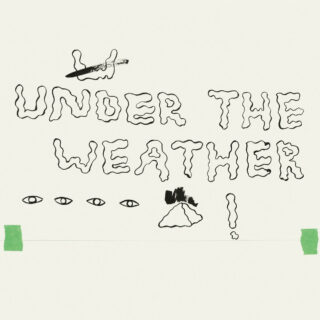 “Eerily prescient” has been used countless times to describe music produced pre-Covid that carries with it an air of loneliness and isolation. The dismal depression that countless people suffered through during lockdown was a reality for Canadian artist Peter Sagar aka Homeshake pre-pandemic. Produced in collaboration with Lucas Nathan of Jerry Papers, Under the Weather is stitched together by Homeshake’s halcyonic vocals and funk-inspired electronica. The act of making an album contributed to Homeshake’s process of relieving pressure, of processing a deeply personal pain. His fifth album is covered in tangible emotive fingerprints, monikers of a gentle yet stark reality.

The record follows a cloudy groove, an ambient thread that compliments Homeshake’s descriptions of languish and life. Tinkling synths dance between paired back drums and drowsy guitar keeps the tempo tranquil and unrushed. A fogginess floats around the first half of the album only breaking with the bass heavy ‘Mindless’ that bounces along at a steady pace. Over layered synths, Homeshake opens up to the possibility of opening up, singing “If you read my thoughts, I wouldn’t mind it.”

Sprinkled throughout are recordings of domestic normalcy such as a teaspoon stirring a hot drink and being dropped on a countertop followed by a disembodied voice saying ‘take this’ on ‘Half Asleep after the Movies’. Distorted and lethargic, these filtered conversations feel as if they are heard through a thick pane of glass. These everyday moments break up the heavy electronics and give way to the more uptempo tracks that elevate the album from hopeless to hopeful. Bookended by instrumental tracks ‘Wake Up!” and ‘Reboot’, there is a sense of the gloom being a temporary state, one that shifts and can be shaken. Under the Weather may be about the struggle of making it through endless days but the album never concedes to becoming sickly with sadness. Pulsating with skilful bass and guitar composition, Homeshake puts his depressed mind to healing work, producing an album that doesn’t concede to the murk but floats along coolly in its aloofness.