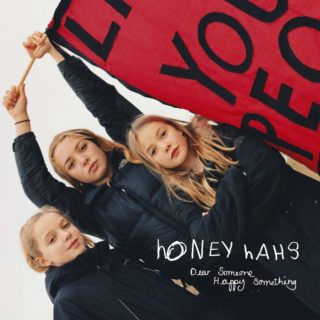 Ok, let’s get this out of the way early on: the three members of The Honey Has are very young. You’ve probably heard about this. The youngest of this trio of sisters, their drummer, is eleven. They’re already assured live performers (this writer first saw them playing, unfazed, to a full to capacity tent at End Of The Road 12 months ago), and Rough Trade have thought nothing of putting their considerable heft behind a band so inexperienced.

The studio can be a revealing place, but an unmistakable, inherent songwriting skill is obvious from the outset. ‘Forever’ is a tale of post-apocalyptic survival, cocooned in strummed chords and sweet harmonies, dealing with big themes in a straightforward way (“Would it not be scarier than dying / To live forever”). Meanwhile ‘Rain Falls Down’ is a slice of buzzy punk hanging off a drum machine, and ‘Olive Green’ is a perfectly melancholy, lyrically potent acoustic lament. Elsewhere, echoes of early The Jam and the White Stripes make themselves felt.

It’s assured stuff. A collection of stylistically varied, skillfully put together pop vignettes. And despite the fact is that it’s difficult to divorce the listening experience of the album from the tender years of its creators we urge you to try. The rewards are there.