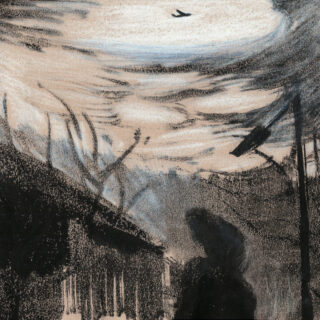 South London trio Honeyglaze – which is vocalist Anouska Sokolow, bassist Tim Curtis, and Yuri Shibuichi on drums – may lack the bombast of previous landmark signings to Dan Carey‘s tastemaking Speedy Wunderground label, but listen closer to their debut and this group reveal themselves an outfit of surprising depth. Picked up by Carey after a short Windmill residency, Honeyglaze deal in a dour, baroque indie-pop that’s close in spirit to The Orielles or Cate Le Bon, and rendered chilly and strange by Sokolow’s excellent, stately English folk dourness. Whilst opening tracks on this album pull their punches in terms of personality – ‘Creative Jealousy’ in particular underwhelms as indie-by-numbers – this is an album that rewards repeat listens.

Take the proggy, brooding ‘Burglar’: at six minutes, its longer running time far better gives space to the band’s penchant for trapdoor hooks and lulling grooves that rouse themselves and suddenly slumber again as though afflicted by a curse. ‘Deep Murky Water’, another standout, bravely cribs the riff to The Beatles‘ ‘Don’t Let Me Down’, and uses surrealist spoken-word and wintry harmonies to further that song’s mood of eerie romantic resignation. When Sokolow delivers lines like “You know my body like no-one else does”, it’s with a stern ambiguity that’s capable of serious wounding. ‘Female Lead’, dipping into the dressing-up box and finding an otherwise unexplored sense of humour, is terrific. By haunting closer ‘Childish Things’, an expansive dark night of the soul that conjures Fairport’s ‘Who Knows Where the Time Goes’, there’s enough to fuel the suspicion that this band might be worth a dozen more obvious sprechgesang post-punk South London contemporaries.

Could this debut have been improved by fuller arrangements and perhaps more live experience? Sure, but that the band repeatedly mention Broadcast in interviews suggest spectral realms where this project may surely lead in future. An understated but highly engaging debut. Suck for longer to release flavour.