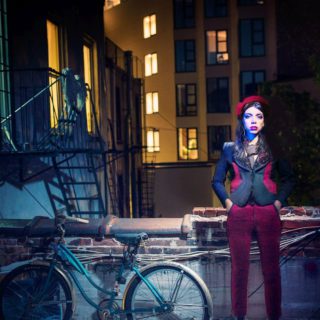 A concept album about identity and cultural theft, ‘The Navigator’ marks a major sea-change for Hurray For The Riff Raff.

The New Orleans-based outfit have been mining the folk-blues scene since they first appeared in 2007. For their sixth release, however, the music and the lyrics are strongly influenced by Alynda Segarra’s Puerto Rican heritage.

‘Life To Save’ forms a bridge with their past, with its rinky-dink country piano, but here it sounds rather musically incongruous. The prevailing influences on this release are instead Latin rhythms.

It opens with the culturally vibrant sounds of a street in the South Bronx, where Segarra began her own journey in search of her identity. Traffic hums, voices shout, and a male doo-wop group starts to sing. It creates an intimacy that pervades each of the 12 tracks, with Paul Butler’s production giving them a live feel.

This approach works well on the epic rock of ‘Hungry Ghost’, on which Segarra channels the urban attitude of Chrissie Hynde, but it’s with the rousing ‘Pa’lante’ that it excels. Building up from simple voice and guitar, it switches to a Beatles-y mid-section, before ending on a note of defiance as she urges her people to “be something”. It’s one of the album’s key moments.

The other cornerstones are ‘Settle’, which is like Devendra Banhart’s ‘Lucky’ with cinematic strings, and lead single ‘Rican Beach’, which combines Latin percussion and raw guitar lines with a stark warning against Trump’s America (“We’ll build a wall to keep them out…”).

But it’s with ‘Finale’ that Segarra really seems to have found her musical and cultural home. A Spanish guitar plays and Latin drumming gets faster and faster, a male vocal line seeming to take the album right back to its opening street cries.

Hurray For The Riff Raff