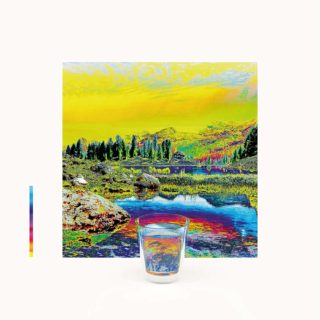 Plenty of bands excel at generating a sense of menace in their sound. For nearly as many, though, that menace is both reassuringly performative and disappointingly artificial. But with Housewives it’s hard to be so sure: their dank, angular and urgent take on post-punk through the prism of skronking ecstatic jazz, jarring polyrhythm and aesthetically pure snarl is as terrifying as it is fascinating, rendering the attendant threat immeasurably more real.

With that in mind it’s something of a relief that their second album is only 37 minutes long, given its nerve-rattling, feral soundworld. Swirling electronics, like toys run amok, introduce ‘Beneath the Glass’, before a thrillingly bare snare hit augers the arrival of ranting vocals. There’s a groove, slinking and stark, then sinisterly detuned ice-cream van chimes, then fuzz and digital decay, mayhem and oblivion, aural darkness and then just silence – all in the first song.

Elsewhere, rhythms don’t so much rub up against each other than grate, deliberately and abrasively, and a dissonant restlessness abounds. On ‘Speak to Me’ there’s a little of the contorted panic of Ian Curtis; ‘Dormi’ presents the same sort of fractured techno as Autechre, familiar but eerily astray; lines of instrumentation enter and disappear at will throughout, creating a Kubrickian sense of bewilderment.

Thankfully, it’s not all bleak: ‘SmttnKttns’ is the roundest thing here, sax drones smoothing out the still-hectic drumming, and some harmonic consonance encourages the impression of a love song, all celestial twinkles and hummable melody. ‘Hexadecimal Wave/Binary Rock’ also makes for a dreamy final track, replacing hits of ugliness with big washes of fractured sound over a glacial seascape and, in doing so, offers a nicely nuanced shape to the LP.

In the main, though, it is bleak, and Housewives startling proficiency in this sort of nightmarish deconstruction is what makes ‘Twilight Splendour’ such an engrossing experience. This is the aural equivalent of tasting blood, an acrid metallic sensation that’s alien yet simultaneously utterly internal, nasty but unignorable. Like any good horror, though, ‘Twilight Splendour’ is also essential, vital and rather breath-quickening. Uneasy listening this seductive, radical or authentic seldom has such tang.