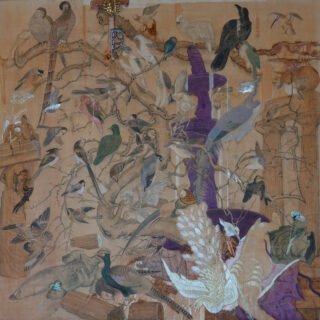 It’s hard to know where Howie Lee begins and ends as a musician, but it’s also what makes him such a compulsive talent. A Beijing-based visual artist, producer, and composer who’s been at the forefront of Chinese club music for the last few years, he’s at his best when he’s a creator of worlds – sometimes clashing Eastern and Western culture together in a blaze of colour and violence, other times weaving beat-driven futurism around traditional Chinese folk sounds.

Earlier this year, his barracking track and video for ‘Double Kings’ corralled inspiration from the zombie kung fu of Jiangshi fiction, flickering apparitions and brutal, blood-gushing violence, but here, he’s about as far removed from the dancefloor as he’s ever been in the peaceful, meditative world of Birdy Island.

Based around the concept of a floating Sicilian theme park in the clouds – co-inhabited by both birds and ancestral spirits – Lee imagines that a Chinese investment company has actually built it, and asked him to soundtrack the experience. Taking that sense of physical manifestation to heart, his broad interpretation brings Birdy Island to vivid life as a layered, ambient soundtrack of a real place rather than a traditional album.

That expression gives title track ‘Birdy Island’ its lilting melody, creates a sense of wonderment on the vocal, choir-driven ‘Dawn of the Idols’ and adds a homely, welcoming charm on ‘Wave, Wave, Wave’. But it’s less about creating fairground spectacle, and more about a subtle sense of ceremony that’s brought to life through Taoist music and nods to Chinese culture Lee incorporates throughout.

And whether you buy into the fantastical backstory or not, perhaps the real charm is that by the time Birdy Island reaches its placid climax, you almost wish you were there, wandering around, basking in its celestial, corporate-funded calm – whatever the admission price.