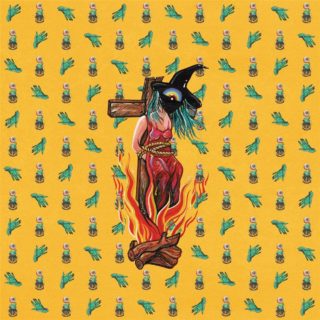 It sounds like HXXS have had it pretty tough this year. Having spent six months of it living out of a van while they toured to support their debut EP MKDRONE, everything appeared to be going great until their completed roadside recordings were knicked. As a result, the version of Year of the Witch that you see before you is actually more a tribute to a lost original, the band having to re-record it from memory and to a brutally crunched timeline.

Unsurprisingly then, HXXS describe their first full-length for Captured Tracks as a record “born of anguish”. Sonically, at least, they aren’t kidding. If Gavin Neves and Jeannie Colleene ever had pop sensibilities, then the last 12-months has hacked them off with a rusty knife. What remains is a mutilated form of electronica, fractured and torn with discordant noise. A lot of Year of the Witch might nod towards pop, but mostly the songs throb and sting like an exposed nerve.

Perhaps due to their misadventures on the road, the album also finds HXXS in an embittered mood. Like a lot of art created in the aftermath of the 2016 US election, the songs speak of a nation divided. Still, cleverly Neves and Colleene have turned their rage inwards instead of outwards. The result reflects the new fault-lines that have been driven through almost every family in America. With a profoundly cynical edge, the duo paints a picture of grievances that fester like open wounds. A new America where the ‘bones can’t be placed back where they’re buried’.

By hook or by crook, HXXS have somehow managed to create an unerringly accurate-feeling depiction of the unease and entrenchment that lies at the heart of the West’s current culture wars. For that reason, YOTW might not be the easiest of listens, but it feels like a vital one.