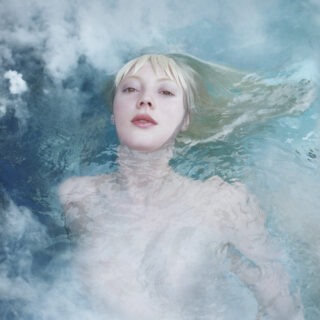 The future of pop continues to be forged in flagrant and polarising ways with PC Music. The collective’s jagged-edged hyper-pop has pushed some to disregard the earnestness of their cartoonish discord, but it helps that some of its young disciples are closing the gap between its abrasive present and an ethereal future.

Hyd’s highly-anticipated debut, Clearing, may be the bridge into that future – just not in a manner that perpetuates its current caricatured nature. As PC Music’s least abrasive release to date, Clearing subverts expectations, even by hyper-pop’s wacky standards, by eschewing its usual near-industrial dissension to lean into avant-electro-pop sublimity. Between its ethereal pulse, utopian hum, and Hyd’s elegant voice, Clearing beckons listeners to wade in and surrender to its thematic core – the necessity of destruction for new life.

Hyd understands the discomfort of endings and the transitionary period before new beginnings. However, they’ve miraculously rendered this discomfort harmonious and of peace. From the ruins of entrapment, codependence, and shame, the first half of the record especially encounters Hyd braving these destructive forces needed for growth. Tracks like ‘Fallen Angel’ and ‘So Clear’ echo this inevitability with boldness; while a most romantic moment like ‘Oil + Honey’ (aided by the divine presence of Jónsi) adopts nuance in view of necessary pain. Still, by forming meaning from ruin, Hyd sprouts new life from all this required, arduous self-realization.

There might not be a more emotionally affecting record to come out of the PC Music camp and the hyper-pop genre than Clearing. Some might argue that this project strays too far from either, but I see it as an evolution, suggestive of a hyper-future that holds chaos and confusion in the same hand as harmony and sensibility. Before Hyd, their friend and producer on this album, SOPHIE, had been building toward this utopia so comely of paradoxes and transition. But with SOPHIE gone far too soon, Hyd has done the hyper-pop matriarch’s vision justice, enlivening the record with the humane vocal performances and universal sentiments needed to connect this weird present with a beautiful future.