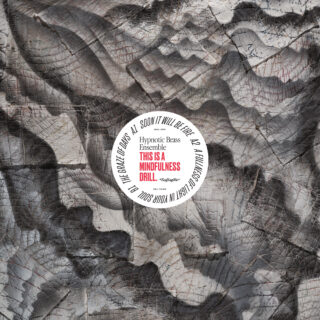 The great indie label catalogue revival is in full season as Mercury enters retrograde for the second time this year (which friends tell me is an excellent moment to reflect upon the past, with the universe rewarding patience and understanding). In March this year, four decades of 4AD signalled in the mammoth compilation Bills & Aches & Blues, where their stars-of-new – the likes of Dry Cleaning, Maria Somerville and Tkay Maidza – reimagined their favourite parts of the label’s history, from Pixies to His Name Is Alive. 15 years behind them in time alone comes Jagjaguwar, gathering pace, with this discreet-at-first glance – but vital – offering as part of their own “JAG25” birthday celebrations.

Hypnotic Brass Ensemble’s This Is a Mindfulness Drill is a quietly contemplative song-for-song rework of Richard Youngs’ 1998 album Sapphie: a record of remarkable purity and solace, originally released on Oblique Recordings before being picked up by Jagjaguwar at the turn of the century. Its three tracks of sparse classical guitar and voice span 37 minutes with a droning brittleness, never needless, both weightless yet battered and bruised, heart-breaking yet life-affirming for the folk revivalists and ambient auteurs alike. It’s the kind of record whose meditative brilliance you wonder and worry might escape you today, should 20 years of repeat listening be so inexorably woven into an album’s being that time is the only spade needed to bury an underground classic.

Enlisting the help of Moses Sumney, Perfume Genius and Sharon Van Etten, Hypnotic Brass Ensemble’s covers build on the original’s gentle fingerpicking into an abounding brass lull, always one restrained moment away from ecstasy. Sumney’s craquelure falsetto dismisses the modesty of ‘Soon It Will Be Fire’ for a concerto, turning exposition into an immediate soft centrepiece. The solitary sage at the heart of Youngs’ ‘A Fullness of Light In Your Soul’ is transformed from “Your picture is still on my wall”-era Daniel Johnston with Mike Hadreas’s gentle confidence, while Van Etten’s still vocals on ‘The Graze of Days’ swarm into mandatory deep listening.

Throughout a remarkable tribute, the only misjudged element is the edited album title. But in Youngs’ words, “reimagining anything is unimaginable”. Across a record heralded as one of the most important, unheard treasures of the last half decade of the twentieth century, what breaks through now is no less a mystery than it was then. Even framed in communality, in contradiction to Youngs’ solitary masterpiece, this rework of Sapphie still feels like a deeply personal thing, leagues beyond some cake and candles for Jagjaguwar.