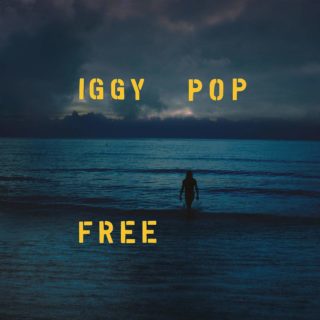 When we last left Iggy Pop, it was on his best, most cohesive record in at least two decades. Written and recorded with Josh Homme, Post Pop Depression was released just weeks after the death of Iggy’s collaborator and patron David Bowie, and exhumed much of the thrilling avant-rock grandeur that typified the work he had made with Bowie on The Idiot and Lust for Life. Post Pop Depression was billed by Iggy as his last ever and, continuing in that grand tradition of final ever (ever) albums and farewell tours, he’s back once again with another au revoir – and why not? Iggy got there first, and what thanks did he get?

A career that yo-yo’d between occasional renaissance and decade-long patches of commercial indifference. And if we’re happier than ever to have Iggy around, well it’s not hard to see why. David gone, Lou gone, the original Stooges gone – the world’s forgotten boy is now the last man standing.

On Free, Iggy has recruited the jazz trumpeter Leron Thomas and the experimental noise guitarist Noveller, tantalisingly suggesting a record that shelves its predecessor’s classicism in favour of invention. Speaking ahead of the album’s release, Pop discussed feeling “drained” after touring Post Pop Depression, and how this album “just kind of happened to me, and I let it happen”. Unfortunately, that’s exactly what this fragmented and ultimately malnourished record sounds like.

There’s glimpses early on of the record that could have been. In the same way that Post Pop Depression was stalked by mortality, Free too flits between poignancy and very last chance urgency. Desire is up against the clock – take ‘Love’s Missing’, the most straightforwardly enjoyable track on the album. A descending rock riff that’s embellished, then suddenly dominated by Leron Thomas’ jazz trumpet, it builds thrillingly. It sounds fevered, agoraphobic, hemmed in. Likewise the brooding ‘Sonali’ is excellent, a randy paean to a first generation immigrant who won’t take his calls when he’s tipsy, delivered in an unusually mannered baritone.

There’s no questioning the honesty of Iggy’s affiliation with the more experimental reaches of jazz – he’s spoken of the revelation of hearing ‘A Love Supreme’ in 1968, and the extent to which the Stooges’ apocalyptic discord was born from what he heard in that music. He picked up a copy of the newly released Bitches Brew shortly before heading into the studio to record Fun House, and that record can be viewed as in dialogue with Miles Davis’ future-shock fusion. But what Fun House did (and indeed what Bowie’s Blackstar did with Donny McCaslin), was utilise the structure and form of jazz to shape something novel; and that is not what’s going on here. Indeed, the best tracks on this record are curiously the least jazzed out of the whole affair.

Iggy is a master of economy – his best work does a hell of a lot with precious little – but ‘James Bond’ simply feels underthought, if not gimmicky and annoying. This in itself is surpassed by the mystifyingly poor ‘Dirty Sanchez’, whose lyrics were written by Leron Thomas. “The online porn is driving me nuts” goes one line, “just because I like big tits doesn’t mean I like big dicks”. The most charitable reading of this, and I am trying, is that Thomas’ writing is striving for the dumb trash aesthetic that Iggy has mined so successfully throughout his career. Again, that’s a charitable reading.

This also means that it can feel tonally off-kilter when Iggy returns to the somber and to the reflective – be careful you don’t get whiplash from the aesthetic u-turn of Iggy then pivoting to a spoken word recital of Dylan Thomas. As any listener to Iggy’s 6Music show can testify, he’s a charismatic and weighty spoken word presence, but this run-through of Thomas’ most familiar poem can feel faintly hackneyed. Continuing in this vein, ‘We Are the People’ is a recital of a Lou Reed poem that went unpublished until after Reed’s death in 2012, and it nicely aligns Pop with his contemporaries who have gone ungently into that good night. But it’s too little. Free may share a melancholy, and an engaging self-referential spirit, with Post Pop Depression, but it’s a grab bag of incomplete ideas grasping for cohesion.