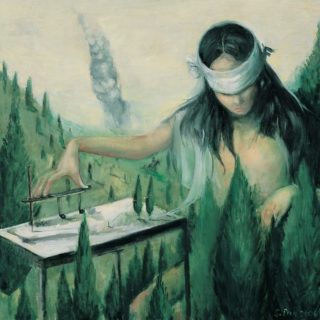 Almost five years ago, aged 19, New Zealand’s Indira Force was already turning heads when her trip-hop duo, Doprah, were tipped by Billboard’s ‘Next Big Sound’ list. Having enjoyed a short spell of international acclaim, the classically trained pianist has spent the last two years working on her anticipated first full length solo release. Her new alias, Indi, forms the outset to an ambitious new chapter, and her album, ‘Precipice’, is a sweeping glance at her unique and nurtured potential.

Indi’s foundations in trip-hop are barely recognisable here, as the album often combines sparse atmospherics with rousing chamber pop that takes Force’s sound into unprecedented sonic territory. It shouldn’t be so accessible but somehow Indi manages it: ‘Precipice’ is far too left field to be treated as ‘pop music’, but all too infectious to be considered otherwise. It’s not perfect by any means, unable to simply excite throughout. But on lead single ‘Dementer’ her compilation of breezy vocals and ethereal arrangements paints a twilight canvas of shimming constellations – a peak of stardom Indi could may well reach on her current trajectory.