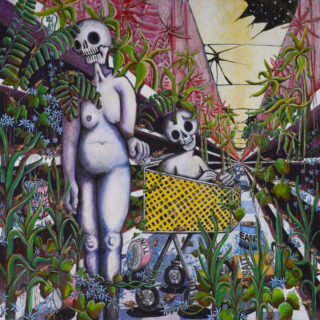 If there was any doubt that Indigo De Souza was being sincere when she called her debut album I Love My Mom, its follow-up sets the record straight. “Call your mother / Tell her you love her,” sings the North Carolina-based musician on ‘Kill Me’, which opens with the sparse directness of voice and electric guitar.

This tightrope between heartfelt confession and slacker sarcasm is one she walks across the ten tracks on Any Shape You Take. On the Dinosaur Jr-like grunge-pop ‘Die / Cry’ she grandiosely claims in a sweetly untutored voice, “I’d rather die than see you cry,” an assertion that’s countered by the upbeat melody.

Nonetheless, there’s apparent honesty to ‘Hold U’, when she admits over a lightly funk inflected guitar, “I would go anywhere with you.” The tone is intensified on ‘Real Pain’, which evokes Mitski’s Puberty 2 until a cacophony of layered fan-submitted screams cracks open the surface and admits real human connection.

De Souza has entered a crowded field of artists influenced by ’90s grunge-pop, but in moving past the confines of a home studio to self-produce the record she’s already flexing her wings for fresh musical shapes.