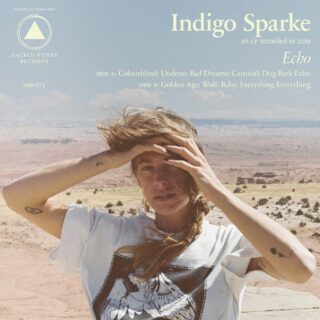 Although it’s by no means all you need to know about Indigo Sparke, a good place to start is that she’s the protege of Adrianne Lenker from Big Thief. As expected, this means her debut album is full of reverb-drenched lonesome melancholic balladry, songs about solitary women smoking while walking down desert(ed) highways, plenty of spectral fuzz from simple electric guitar strums, and acres of empty space. And when it works, its tremendously affecting, full of small-hours half-cut wistfulness and intimacy: the ghostly ‘Bad Dreams’ feels like an excerpt from an epic murder ballad, its lyrical brutality underpinned by its delicacy, and the final third of the album makes for a gorgeous triptych of poise and atmosphere, the combination of battered background piano and brittle vocals on closer ‘Everything Everything’ is particularly haunting.

Unfortunately, though, Sparke occasionally pushes too eagerly on the button marked “eerie” and comes out a bit am-dram: midway through ‘Dog Bark Echo’, she whispers, urgently, “Listen! Do you hear? Howls! A beast is opening its mouth!”, and then she howls. On ‘Golden Age’, too, multi-tracked “oohs” and “aahs” yearn to evoke the sort of mysterious quasi-paganism/profound sadness at which PJ Harvey often excels, but the delivery is too self-aware to believe there’s much genuine abandon going on here. Were Sparke to lean into the sparseness and interiority of her songwriting, Echo would be consistently spine-tingling. As it is, although there’s plenty to admire here, it’s too precious to be perfect.