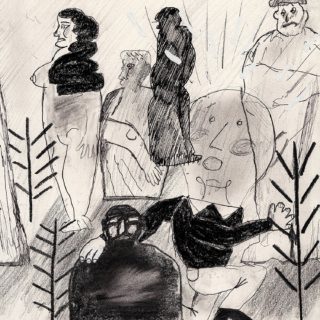 Anybody who says they haven’t got time to be in a band only needs to look towards Manchester’s Edwin Stevens to blow that conclusion out of the water. Experimental dirge project Irma Vep is the fifth (and counting) concurrent musical endeavour for Manchester-based Stevens. Hearing ‘No Handshake Blues’ though – the fourth album under the Irma Vep moniker – one wonders whether all this band-hopping might have bred a slight lack of focus, as the LP flips between the sublime and the superfluous.

Opener ‘A Woman’s Work is Never Done’ is an example of the former, recalling vintage Six Organs of Admittance; thunderous drums, a droning riff and rusted metal guitar that collapses into a scrapyard heap by its end. On the other hand, tracks like ‘Plod’, ‘Hey You’, and the title track add little. Delicate closer ‘Still Sorry’ is a winner; the strings soaring as Stevens confesses: “I’m still sorry, I don’t know what I want.” But is he talking about his relationship, or his music?