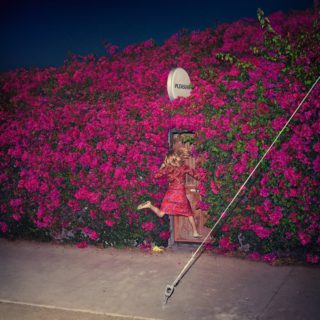 A sentence is appended to the very end of the blurb that accompanies promotional copies of ‘Pleasure’ informing listeners that Feist “boasts the second-most-watched video in Sesame Street history” (the number-one spot, incidentally, is held by India Arie learning the alphabet with Elmo). The information is part of a final paragraph listing all the Canadian musician’s career accolades, but nonetheless, in the present context, the idea of Sesame Street’s people hearing something as abrasive as ‘Pleasure’ and deciding its composer was the best candidate to sing a sweet melody about counting up to four while surrounded by muppets is utterly absurd.

It is also, however, indicative of exactly how far Feist has come in the past ten years, from the sequin-jumpsuited 100-person dance routines of ‘The Reminder’ in 2007, via 2011’s lushly muscular and perfection-approaching ‘Metals’, to this: an hour of scratchy, rhythmic, wilfully raw dark-night-of-the-soul music full of scabrous repeated mantras about lost dreams, meditations on self-belief and, in one of the oddest guest appearances in recent memory, Jarvis Cocker doing his best impression of Vincent Price’s ‘Thriller’ cameo.

Perhaps the album’s most pervasive characteristic, though, is its menace. Never before has Feist played her guitar so hard as on the title track; her percussion has never clanged with such clout as on ‘Century’. Her singing voice, too, normally resembling gusts of notes that billow poignantly around a song, develops into full gales on ‘Any Party’, turning a potentially rather romantic sea shanty into something far fiercer. Even the sparser tracks here saturate their spidery-ness with a sort of coiled-spring tension.

However, while there’s admirable nuance and an impressive wildness to even the most rugged parts of ‘Pleasure’, a strong constitution is required to digest meat this tough in one sitting: songs seldom end with any intent but instead simply stop, often mid-phrase (or, in the case of ‘A Man Is Not His Song’, are usurped by a final ten seconds of thrash metal), beautifully acrobatic melodies that Feist would once have exalted are here soured by obfuscatory sound effects, and the album’s lurching structure, exciting at first, becomes disorientating over the long haul.

All that said, though, there remains something beguiling about ‘Pleasure’, its studious obstinacy almost daring you to dislike it while simultaneously drawing you in, like a food whose first mouthful is repulsive but then slowly becomes delicious – indeed, like the kind of fare that’s definitely not suitable for kids. You get the impression, after an hour of ‘Pleasure’, that that’s sort of the point.