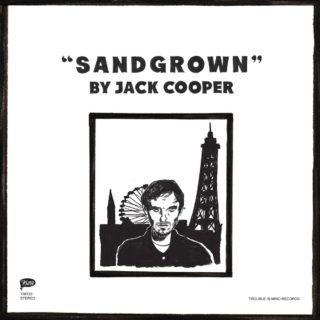 Some albums possess an incredibly strong sense of time and place, and this – Jack Cooper’s solo debut – is one of them, based as it is upon the Blackpool haunts and environs of his youth. Musically, opener ‘North Of Anywhere’ bears strong hallmarks of Cooper’s songwriting style when with his band Ultimate Painting; stylistically it’s something like a Richard Hawley song covered by Pavement, with a lazy tempo and a wandering solo. And Cooper’s talent really does bear comparison with heavyweights such as Hawley.

This record is awash with that timeless brand of classic songwriting that runs through the ages, although ‘Sandgrown’ isn’t overly soaked in sepia tones, with songs like ‘On A Pier In The Wind’ feeling evocative yet immediate. A vaguely stoned quality creeps in at times, as on the immersive, repetitive riff on ‘A Net’, while ‘Memphis, Lancashire’ has a shimmering vocal melody and a verse which sounds like ‘Hotel California’ moving through syrup. ‘Sandgrown’ is a record that feels effortless, crafted, and at times sublime.