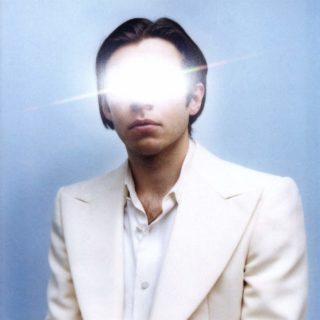 The title track of ‘The Performer’ finds James Righton mulling over the conflict between creative and family life. “That’s not me standing there, in the light / Put [the artistic persona] on for the night,” he croons over a piano line that sounds suspiciously like Foreigner’s ‘Cold As Ice’.

It’s a theme that permeates his first solo album, which sees him settling a little uncomfortably into his mid-30s after a youth spent at the forefront of the New Rave movement with Klaxons and short-lived project Shock Machine.

There are traces of his past work on the album – notably the woozy Tame Impala-isms of ‘Devil Is Loose’. For the most part, though, he guides his introspection firmly through ’70s influenced singer-songwriter territory.

‘See The Monster’ borrows from the psychedelic atmosphere of Lee Hazlewood’s ‘Some Velvet Morning’, the ode to his daughter ‘Edie’ finds him slipping into a lounge suit to play piano, and the instrumental saxophone interlude ‘Lessons In Dreamland Pt. 1’ tests the water in a smoky nightclub.

Part recorded in Bryan Ferry’s studio, Righton seems to be styling his post-band career on the former Roxy Music frontman. This results in a sophisticated album that nonetheless lacks the visceral thrill of a true performer.