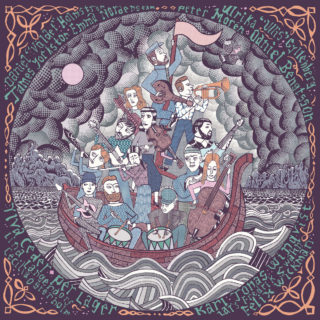 A Scotsman goes to Sweden to record an album. He’s never met many of his collaborators, and they’ve never heard the songs they’ll be recording. He says ‘hello’, they say ‘hallå’, and they get to work. Three days later, they finish The Wide, Wide River, the latest release from prolific singer-songwriter James Yorkston. It’s a testament to the connective power of music – people who otherwise would be nations away bonding over a love of creation.

Two things are going on here. Yorkston’s original songs – all vocal inflections and lyrical specificity – were all written before recording. Then there’s the Second Hand Orchestra, improvising as they go. Opener ‘Ella Mary Leather’ gives fractured details of a lost flame, Yorkston recalling trying to persuade a woman not to piss on her ex’s bags. Who knows how that translated, but the orchestra understood the tone: uneasy, unstable and unrelenting. They provide instrumentation to suit, and that’s the album in a nutshell. It works on songs that worry (such as ‘Struggle’, an account of mental illness backed by these expansive high-pitched melodies). It works on songs that are ominous (like album highlight ‘A Very Old-Fashioned Blues’ with its shrieking falsetto warnings). It works on songs that ponder (‘We Test The Beams’ with its gentle floating ascents and descents). It just works. What would be a fun Yorkston album becomes something more due to the presence of the orchestra. We do amazing things when we work together.