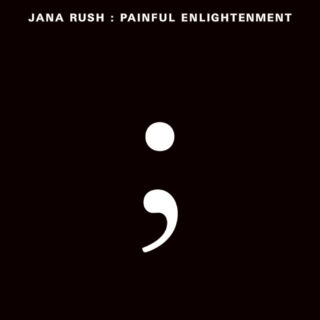 Calling Painful Enlightenment a footwork album is like calling Derek Bailey a jazz guitarist. All the consummate pieces of Chicago musician Jana Rush’s production are present and correct – slow-mo swordplay percussion, pulsating bass, back-slipping samples – but only as raw materials for a much darker, more abstract re-think of what the genre could be. Naturally, with that comes a certain amount of baked-in difficulty.

At nine minutes of sparse, throbbing rhythms, crusty video game exclamations and a single, orgasmic moan played over and over again without ever allowing the listener to become desensitised to its much-too-clear fidelity, album centrepiece ‘Suicidal Ideation’ is hard work. ‘Spot’ too feels like watching an incredibly uncomfortable sex scene where the camera lingers far too long with too few edits. It’s less a song that manipulates erotic sounds than one that suggests Rush forgot to close all of her tabs before recording. But the slow jam-like chord sequence shades the hardcore pornographic grunts with oddly tender cadences. While the record delivers satisfying, stuttering beats all across the board, it’s at its absolute best when it provokes the listener into thinking about what they themselves deem to be gratuitous, all-too-explicit, irritating or even kind of sexy.

Rush continually breaches the limits of her past work (and good taste) by putting revulsion, baseness and discomfort to use – with truly affecting results. What’s more, Painful Enlightenment feels like a rewarding, groundbreaking footwork record for daring not to sound much like footwork at all.