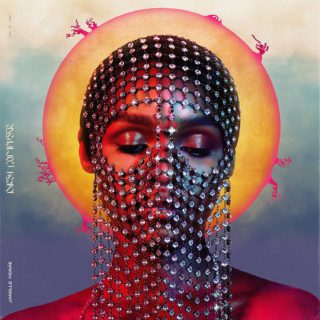 Janelle Monáe has inhabited an alternate creative universe since 2007’s ‘Metropolis: Suite I (The Chase)’, the EP that first introduced her android alter-ego Cindi Mayweather. Refracted through the prism of Afrofuturism, the Atlanta-based artist’s imagination thrived, and her output set progressively higher benchmarks, first with 2010’s acclaimed debut-proper ‘The ArchAndroid’ and then 2013’s exquisite ‘Electric Lady’. For her next challenge, Monáe’s chosen to strip away the artifice and reveal her true self; a task she reportedly found so daunting that she deferred it as long as possible (though you’d imagine that burgeoning acting career diverted her attentions too).

And yet, as is implicit in its title – and in double entendres like ‘Take A Byte’ – ‘Dirty Computer’ isn’t quite the volte face you might be bracing yourself for. Monáe’s creative domain remains impressively high-concept, as demonstrated by the record’s billing as an “emotion picture”, delivered as part of a package with “an accompanying narrative film.” Even putting these immaculately styled and choreographed visuals to one side, the eponymous opening track lays bare the scale of her ambitions, its laidback groove carrying an extremely rare cameo from Brian Wilson and his balmy, multi-tracked harmonies. Meanwhile, the spectre of Monáe’s late-mentor Prince hangs over the openly-nostalgic ‘Kiss’-lite funk of ‘Make Me Feel’ and in the ‘Let’s Go Crazy’-aping synth bursts on closing track, ‘Americans’.

Prince’s influence is felt much more effectively in the record’s celebration of sexuality and gender fluidity, be that in the interchangeable pronouns and carpe diem messaging powering ‘Crazy, Classic, Life’, or in demands to be “screwed like an animal” in the 80s-flavoured Zoe Kravitz-duet ‘Screwed’. The latter segues impressively seamlessly into the slick, orchestral hip hop of ‘Django Jane’, celebrating female and black excellence via bars like, “Black girl magic, y’all can’t stand it.” Meanwhile, the celebratory middle-section is concluded with the album’s weakest and strongest tracks respectively (clunky Pharrell duet ‘I Got The Juice’ versus ‘I Like That’, which mixes defiant messaging with a dreamy mix of trap and R&B).

It’s interesting that Monáe was so reticent to reveal more, particularly as the concessions she’s made don’t result in a more candid depiction of her personality. As a listener, you come away from the record with a strong grasp of her politics around race, gender and societal inequality (see the spoken word samples on ‘Americans’ and soundbites like, “This pussy grabs back,”) but little sense of any emotional vulnerability. Still, as complex, agenda-pushing pop goes, ‘Dirty Computer’ is undeniably impressive.

In the UK? Subscribe to Loud And Quiet magazine and gift a mate three months for free