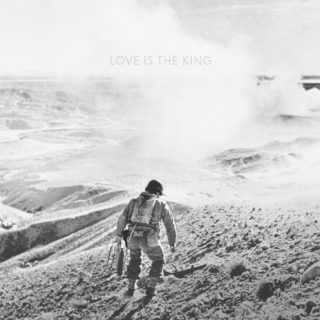 According to Jeff Tweedy’s second book How to Write One Song (released almost simultaneously with Love Is The King), the Wilco chief doesn’t buy into the poetic mystery of being a channel for some otherworldly transmission of melody and words.

For Tweedy, being a songwriter equals hard graft: rather than being handed down by a kindly muse, inspiration requires a steady input of energy and elbow grease. Having replaced bad habits of the past with a non-stop work ethic, Tweedy writes of sticking to a tireless routine of creativity. The result is a pace of productivity that sticks out in an era where major acts spend a month getting the snare sound just so.

Fittingly, then, first encounters with Love Is The King (Tweedy’s third solo album, fourth if you count Warmer, an extra slice from the sessions that produced 2018’s superb Warm) suggest that we are dealing with the outpourings of a relentlessly churning writing machine, as opposed to divine gifts from the gods of song.

Cooked up at Tweedy’s Chicago rehearsal/studio space once the impact of the COVID-19 pandemic stalled Wilco’s US tour, Love Is The King sticks within a socially distanced family bubble, with only sons Spencer (drums) and Sammy (backing vocals) present to help their old man flesh out this selection of eleven tunes. Not that there is a lot of decoration going on here: the sound of the album is sparse, no-frills, even workaday, reminiscent of a stripped-down core of a band laying down low-pressure demos, complete with guitar solos (Tweedy really is an underrated axe-ist) that seem to emit from an amp in the throes of a breakdown.

Song-wise, Love Is The King can appear pretty timid for such a regally-titled offering. There is a sense of unshowy insularity that, whilst perfectly fitting with these uneasy times of social distanced isolation and lockdowns, can underwhelm. Keep digging though, and compelling depths soon emerge. The carefree country lilt of ‘A Robin Or A Wren’ hides a fresh vision (written with assistance from acclaimed US novelist George Saunders) of afterlife visitations to loved ones as a chirping winged creature. The mellow late period Velvet Underground choogle of ‘Gwendolyn’ unfurls with the fuzzy logic of a (bad) dream, evidencing the wisdom of Tweedy’s habit of writing songs as puzzles built around startling phrases or word couplings uncovered during regular writing exercises.

As a more or less contended elder statesman of American alternative rock, the 53-year old Tweedy is obviously and happily no longer the tensely wound ball of angst that crafted the exquisitely anxious alienation of Wilco’s most celebrated works. However, at their best, the themes of sharp introspection and the emotional comforts (and hidden tensions) of home and long-term relationships that populate Love Is The King can prove just as powerful, with the highlights – the starkly solo ‘Even I Can See’ and the drowsy, self-explanatorily titled ‘Troubled’ – hitting a compelling balance of joy and unease, trouble and relief. The album’s withdrawn overtones make the occasional outbreak of unashamed uplift (‘Guess Again’) sound like sunbeams breaking through low-hanging clouds.

“A light left on in an empty room is how a love can be”, Tweedy sighs on the hushed ‘Save It For Me’. A record to mature over time rather than instant classic, Love Is The King might just prove an equally reassuring presence as the world stumbles towards some sort of elusive normality during these uncertain times.