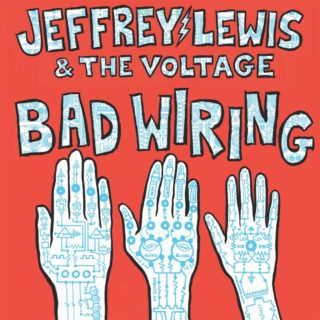 Piecing together Jeffery Lewis’ back catalogue can be tricky. Not because there’s any limited selection, but rather it’s hidden behind the constantly revolving door of band names attached to his work. This time paying homage to the fact his middle name is Lightening – a title guilty of being raised by hippie parents in the 1970s – his new album Bad Wiring bears the name Jeffery Lewis & The Voltage across its cover and makes sure we haven’t forgotten about one of the world’s quietly brilliant songwriters.

Lewis has spent his twenty-year career adapting his New York anti-folk legend status to a true indie rock cult leader. His lyrics are addressed to a collective of hopeless wanderers, the anxiety-ridden few whose concerns surrounding the people we are and the world we live in seep uncontrollably through the cracks. On Bad Wiring, his unique and winding storytelling spans remedial musings of convenience stores and bargain bin vinyl sales. Everything Lewis sings about feels existential, deeply introspective and yet, far bigger than himself.

He’s constantly tortured by life’s broader issues, the ones most of us are too short sighted to give less than a moments thought. When he’s not strumming over his band’s playful chants, “Depression! Despair! I’ll see you there!” (‘Depression! Despair!’), Lewis is being dragged down from soaring heights of obsessive overthinking. ‘My Girlfriend Doesn’t Worry’ confirms Lewis’ own isolation from even his closest loved ones but comforts the weary souls of his like-minded listeners.