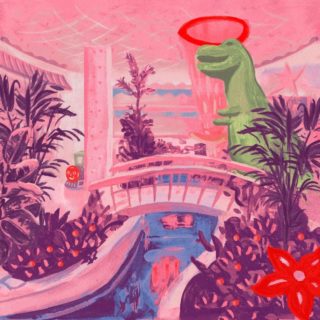 Jerkcurb, apparently, makes music for the night time. Not club music, or even pre-drink music, but music for clear-sky cab rides and the post-party clean up. Crisp, Spring nights. His debut album Air Con Eden floats, unhurried, through a strange microclimate of its very own.

Air Con Eden is a slow album. It calls for immersion, and time – a risk in what we might call the instant gratitude economy. And yes, for some of us there are moments when things stretch on too long and the urge for a short, fast riff rises. But Jerkcurb can wash those away. Like, well, like ‘Water’.

‘Water’ is something of a lullaby in the style of Bill Ryder-Jones, muted and tender as Jacob Read muses on his father and the ocean that once separated him from his American mother. Here Read explores themes that crop up at various points throughout Air Con Eden – distance, and time. There is no urgency on the album. Even album closer ‘Night on Earth’, about two people finding true love on the very last night before the apocalypse, swells and ebbs as though the lovers have all the time in the world. The dark duet ‘Wishbones’, too, follows a pair of doomed lovers letting the clock run itself out. With one party behind bars and the other dreaming of his return, the noirish atmosphere offset by a sweet mellotron, the song slinks away on a cliffhanger. All of which means Air Con Eden is an open-ended kind of album. No bad thing if you’re happy to take things slow.