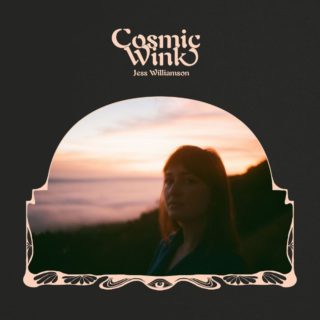 The turning point at which Jess Williamson finds herself on the release of her third album and first for new label Mexican Summer will be familiar to many a singer-songwriter. As she describes it, her music to date has been defined by “heartache, depression and sadness”, but after an inspiring move from Texas to Los Angeles, her outlook has changed. On ‘Cosmic Wink’, her commitment to the familiar confessional, emotionally wrought persona has if not waned, then been negotiated with so that it can operate alongside a more playful and open writing style.

It is a frequently successful formula, with much of this front-heavy album being carried along at a clip with a casual, confident melodic flair. Arrangement-wise, Williamson does not push the boat out, relying instead on an appealingly unshowy, largely acoustic guitar-driven palette. Opener and lead single ‘I See the White’ is typical; a warm embrace to welcome the listener, in much the way that early period Elliott Smith might have done. Williamson’s vocal is commanding without being commandeering, singing still of broken-heartedness, but with a renewed faith in the healing power of time.

The best moments coincide with the most memorable melodies, with ‘White Bird’ and ‘Wild Rain’ standing out especially. Williamson has said that she wants ‘Cosmic Wink’ to be an album admired by her mom as much as the usual hipsters: after this change in direction, it’s hard to imagine that many people from any walk of life will listen and fail to find something to admire.